Regulation of graft rejection by direct and indirect alloreactivity pathways

Solid organ transplantation remains the treatment of choice for numerous patients with kidney, heart, and lung diseases. The recognition of allogeneic major histocompatibility complex antigens by T lymphocytes, a phenomenon called alloreactivity, is essential to initiate the immune responses responsible for graft rejection during organ transplants and it remains a major hindrance to the success of transplantation. In spite of the progress made in the recent years on the description of T cell recognition, the molecular basis of alloreactivity remains elusive. Moreover, little is known about the actual contribution of allorecognition to the physiology of graft rejection in vivo. Two pathways of alloreactivity have been described. Indirect alloreactivity corresponds to the classical pathway of antigen presentation, as the allogeneic  MHC molecules are degraded and the peptides derived from these  molecules are presented to T lymphocytes of the recipient in  an autologous context (restriction to self-MHC).   On the other hand, direct alloreactivity corresponds to  the recognition of the intact allogeneic MHC molecules on  donor cells by the recipient's T lymphocytes. Although the  importance of direct alloreactivity in allograft rejection is  well documented, there are now several compelling evidences  suggesting that the indirect pathway would also be clinically  relevant for solid organ allograft rejection, and particularly  for chronic rejection.

Our research program in transplantation immunology aims at characterizing the in vivo mechanisms of CD4+ T cell activation by direct and indirect alloreactivity pathways, and their contribution to acute and chronic rejection of solid organs. Our laboratory has previously shown that CD4+ T cells activated by these two alloreactive pathways recognized their respective antigens in distinct physiological sites. More importantly, we have shown that secondary effector cell populations (cytotoxic T lymphocytes, B cells) are differently regulated by direct or indirect alloreactivity. We now want to characterize further these responses. In particular, we want to visualize where the interactions between alloreactive CD4+ T cells, antigen-presenting cells, and secondary effector cells occur, and decipher the molecular interactions involved.

Since its introduction into medical practice in the 19th century, vaccination has been recognized has one of the most successful approaches to prevent infectious diseases. The mortality and morbidity due to several infectious diseases have been dramatically reduced by widespread use of vaccination. Many of the available vaccines are still produced through relatively conventional technologies, and their development has often been empiric. Moreover, the mechanisms of protection triggered by these vaccines are often still largely unknown. Improvement of existing or development of new vaccines relies on a comprehensive understanding of the mechanisms behind the induction and maintenance of efficacious and long-lasting immunity against pathogens.

A novel technology, known as ProteosomesTM, has been developed by ID Biomedical (now GlaxoSmithKline) and shown to significantly improve the efficacy of vaccination against a number of human pathogens. The aim of our work is to characterize further the mechanisms underlying this enhanced efficacy. We have hypothesized that the ProteosomeT-based adjuvant technology is particularly efficient at inducing protective immunity because of its ability to fully activate cells of innate immunity, in particular dendritic cells (DCs), which leads to optimal antigen presentation and activation of adaptive immune responses. The objectives of this research program are to characterize the innate immune response elicited by ProteosomesT and to study the mechanisms by which they initiate and modulate adaptive immune responses.

Dr. Claude Daniel obtained his B.Sc. in Biology (1986) from the Université du Québec a Montréal and his Ph.D. in Virology (1993) from the Institut Armand-Frappier. He was then hired as a research associate at the Histocompatibility Laboratory where he was responsible for implementing molecular typing techniques. He was appointed Assistant Professor at the Immunology Research Center of the Institut Armand-Frappier and in charge of the Histocompatibility Laboratory in the Fall of 1997, following two years of postdoctoral studies with Dr. Paul Allen at Washington University in St.Louis, Missouri. 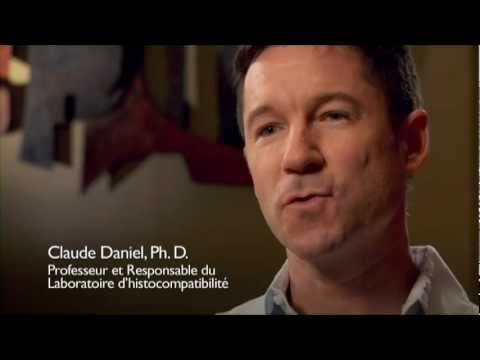