Researchers reshape the energy landscape of phonons in nanocrystals

Phonons, which are packets of vibrational waves that propagate in solids, play a key role in condensed matter and are involved in various physical properties of materials. In nanotechnology, for example, they affect light emission and charge transport of nanodevices. As the main source of energy dissipation in solid-state systems, phonons are the ultimate bottleneck that limits the operation of functional nanomaterials.

In an article recently published in Nature Communications, an INRS team of researchers led by Professor Luca Razzari and their European collaborators show that it is possible to modify the phonon response of a nanomaterial by exploiting the zero-point energy (i.e., the lowest possible – “vacuum” – energy in a quantum system) of a terahertz nano-cavity.

The researchers were able to reshape the nanomaterial phonon response by generating new light-matter hybrid states. They did this by inserting some tens of semiconducting (specifically, cadmium sulfide) nanocrystals inside plasmonic nanocavities specifically designed to resonate at terahertz frequencies, i.e., in correspondence of the phonon modes of the nanocrystals.

“We have thus provided clear evidence of the creation of a new hybrid nanosystem with phonon properties that no longer belong to the original nanomaterial,” the authors said.

This discovery holds promise for applications in nanophotonics and nanoelectronics, opening up new possibilities for engineering the optical phonon response of functional nanomaterials. It also offers an innovative platform for the realization of a new generation of quantum transducers and terahertz light sources.

This experiment is described in the article “Reshaping the Phonon Energy Landscape of Nanocrystals Inside a Terahertz Plasmonic Nanocavity,” published in Nature Communications. Doi:10.1038/s41467-018-03120-3 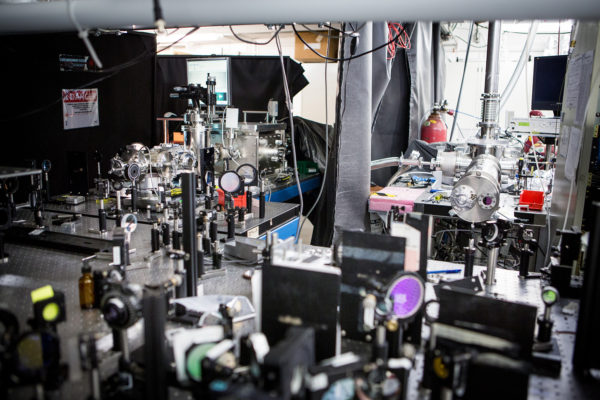