Mobile Laboratory for the Physical, Chemical, and Mineralogical Characterization of Rocks

LAMROC is equipped with a semi-automated system for conducting non-destructive measurements of various core sample parameters (e.g., density, magnetic susceptibility, geochemistry, mineralogy) at a high spatial resolution. It can also acquire line-scan images of the core in order to compare measurements with the visual appearance of the rock, to better understand variations in various parameters and compile a comprehensive virtual archive of the drilling. 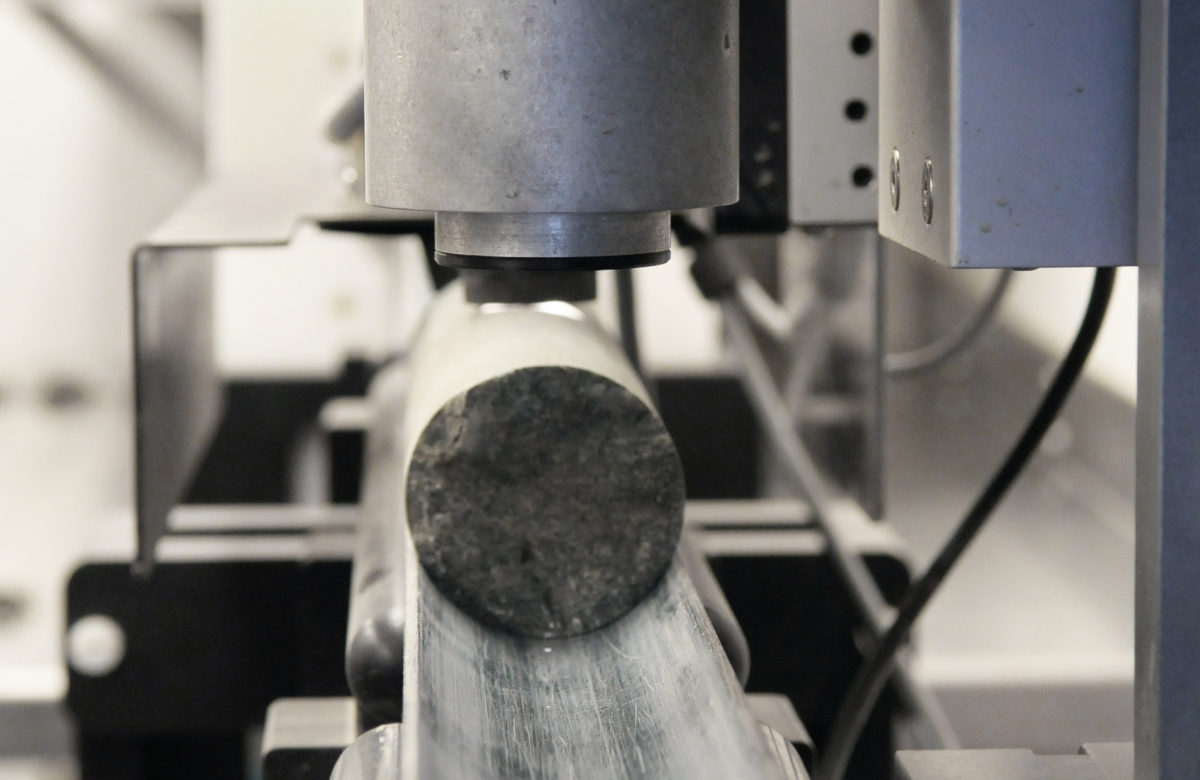 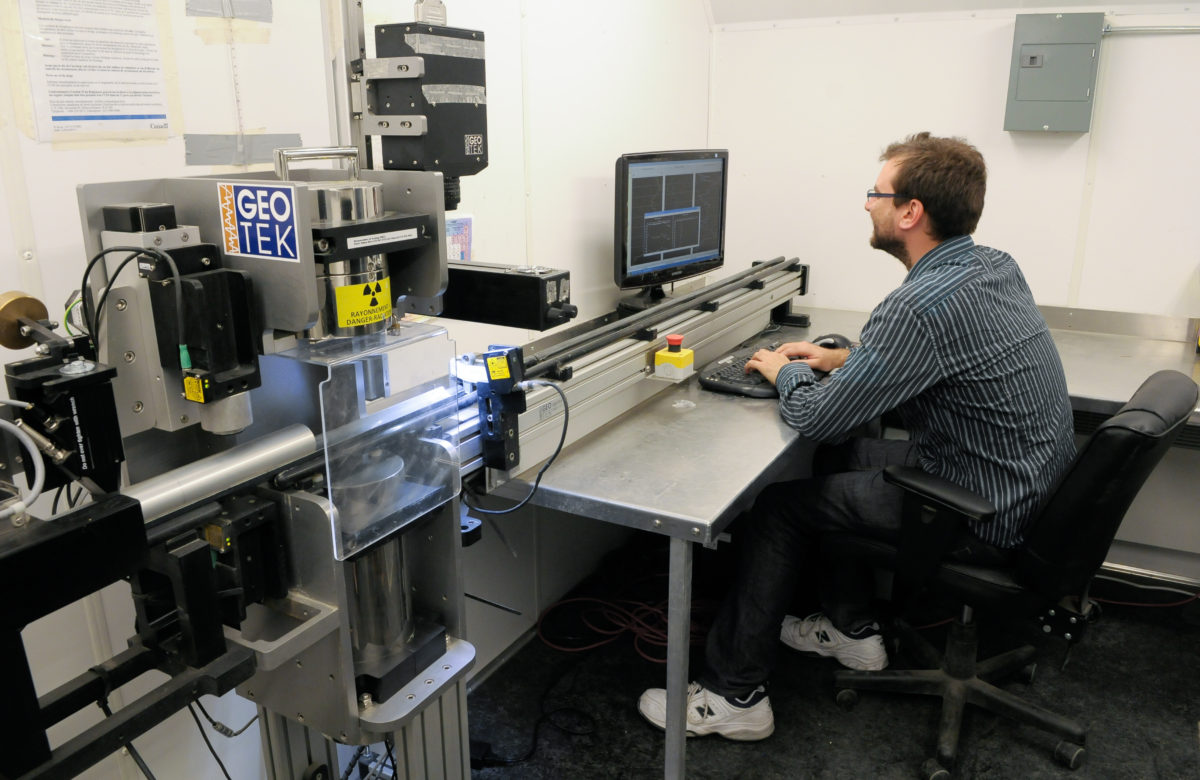 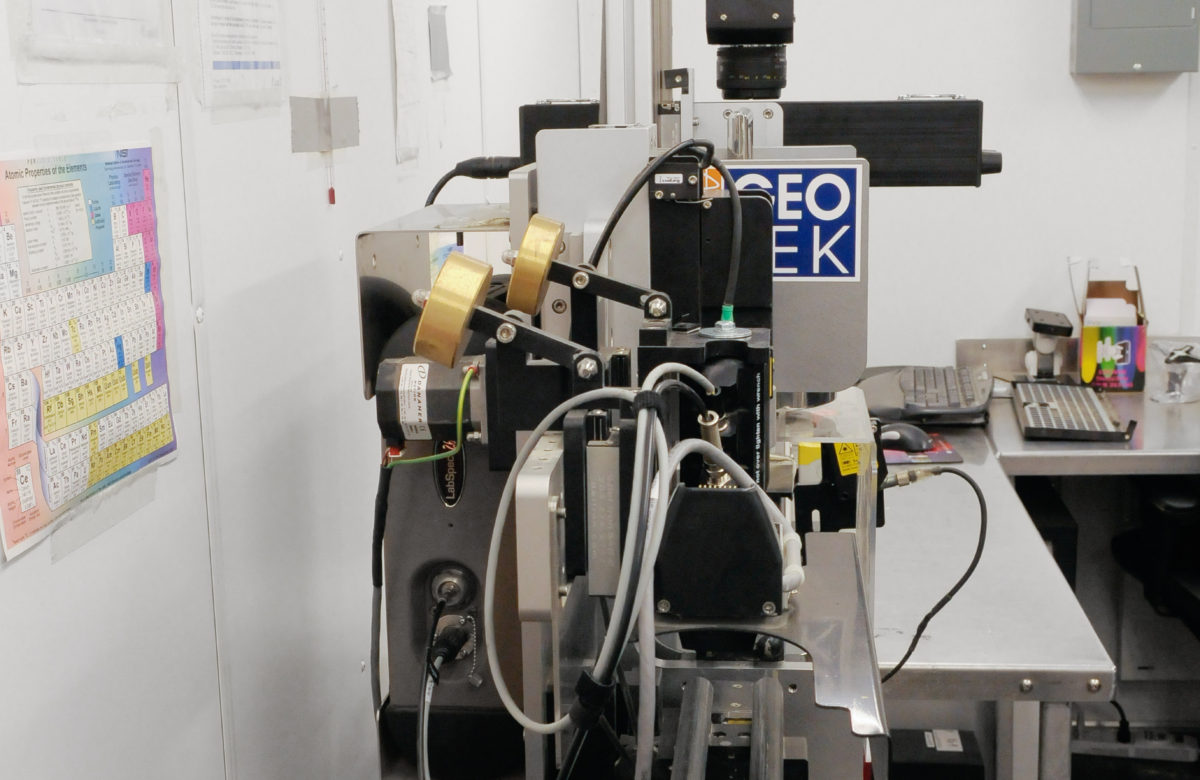 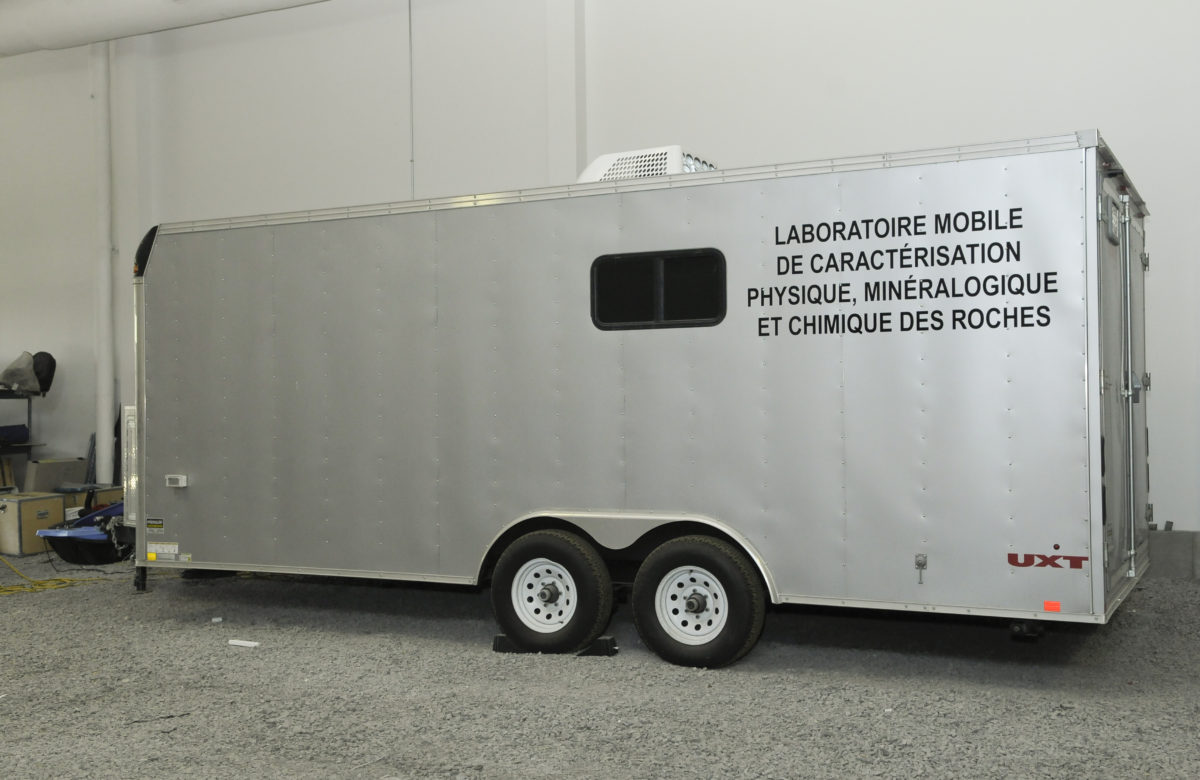 LAMROC is equipped with a semi-automated system for conducting non-destructive measurements of various core sample parameters (e.g., density, magnetic susceptibility, geochemistry, mineralogy) at a high spatial resolution. It can also acquire line-scan images of the core in order to compare measurements with the visual appearance of the rock, to better understand variations in various parameters and compile a comprehensive virtual archive of the drilling.

The main technological innovation of this research facility is the ability to take virtually simultaneous and non-destructive measurements of physical, geochemical, and mineralogical properties directly at core storage sites. Cores can also be sent to INRS for analysis.

Compared to more conventional measurement methods, the Mobile Laboratory for the Physical, Chemical, and Mineralogical Characterization of Rocks yields data of significantly higher spatial resolution (and quality, for certain parameters) thanks to its automated multi-sensor core logger system. 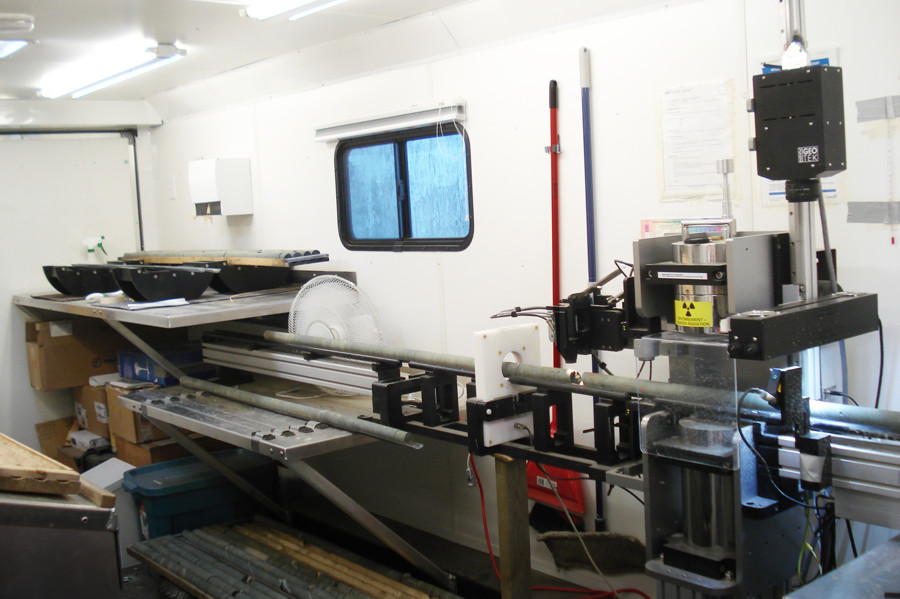 In this system, a 1.5-m drill core section is moved through sensors and instruments by a pusher on rails in order to measure various parameters: magnetic susceptibility, density by gamma ray attenuation, presence of various chemicals, and minerology. It also yields high-quality images of the cores. These images, combined with the multiparameter measurements, immortalize the drilling by supplementing classical geological descriptions and metal analyses. 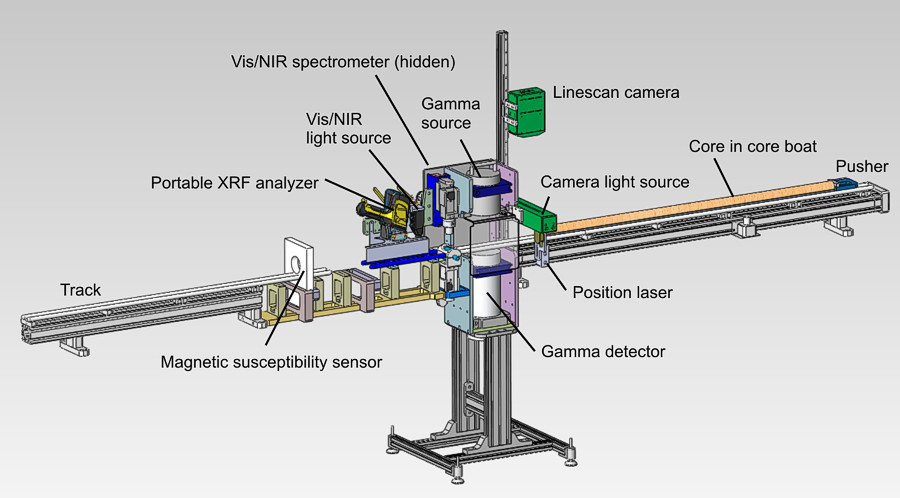 Core positioning is accurate to within 0.5 mm in the automated system, thereby eliminating any uncertainty regarding the relative positioning of the measurements taken of various properties. The system can handle whole or half cores of all standard sizes (BQ, NQ, HQ, etc.). The sensors/instruments and conveyor are all controlled by a single computer so the various parameters are automatically spatially correlated. 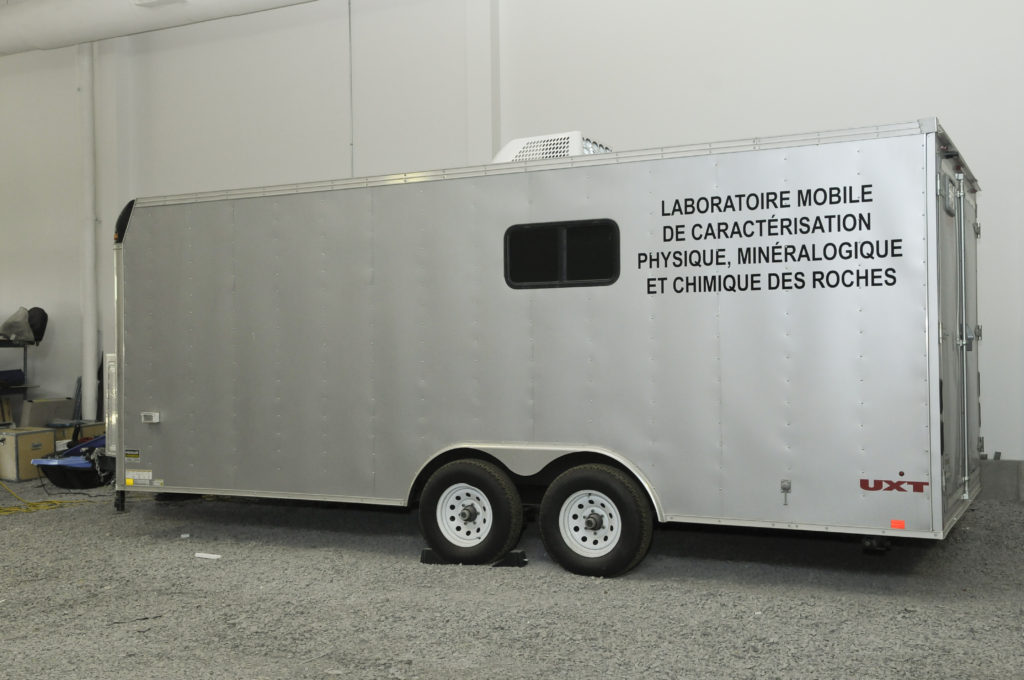 The mobile laboratory is set up in a modified trailer pulled by a 4 x 4 vehicle in order to access core storage sites in remote areas.

Our resources and expertise are also available for external collaborative projects and R&D contracts. Contact us to learn more.

One constant in the mining sector today, regardless of what is being mined, is the importance of diamond drilling, which often eats up the bulk of expenditures, especially in mature mining camps. Deposits exposed at the surface are already known, and drilling is required to find new ones at depth. In base metal exploration campaigns (copper, zinc, nickel), mineralization is visible to the naked eye with the presence of sulfides, so companies analyze only a portion of the core for concentrations of metals of economic interest. For the rest, only geological descriptions of the core are provided before it is stored away (although lithogeochemical analyses are often conducted as well). These descriptions are based on visual observations and vary in level of detail. Dozens of kilometers of cores have accumulated in this manner over the years, most of the time with no further information known about them. The cores become an additional expense (replacement of media, etc.) rather than a source of data to be utilized.

However, further investigation into the physical, chemical, and mineralogical properties of drill cores (e.g., by LAMROC) is helpful for a number of applications:

The Matagami mining camp is located in the north of the Abitibi Subprovince in Quebec and contains Archean-age underwater volcanic rocks (and intrusives) with approximately 20 associated polymetallic (Zn-Cu-Ag-Au) volcanogenic massive sulfide (VMS) deposits. VMS deposits have been mined in the region for decades. 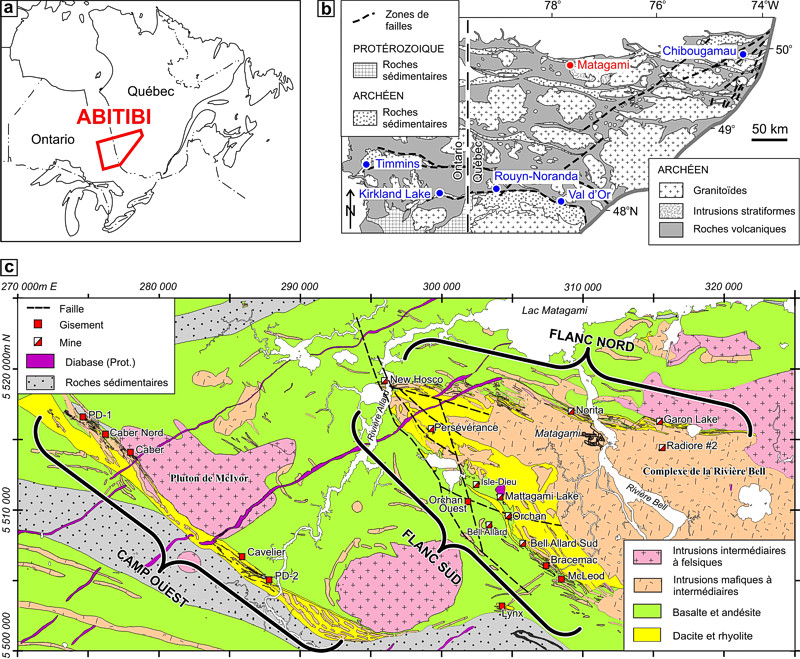 Ten exploratory holes covering the South Flank (McLeod, Bracemac, central South Flank, Perseverance), the North Flank (New Hosco, Norita, Bell Channel), and the Caber deposit in the West Camp were analyzed with LAMROC. This represents a total of more than 7,000 m of core, some 26,000 measurements of density, magnetic susceptibility, and infrared and visible spectrometry, and some 12,000 geochemical measurements taken with handheld XRF analyzers.

The original geologists’ descriptions were largely accurate in the ten boreholes studied, but it is sometimes difficult to distinguish between, for example, a massive lava and a fine-grained intrusion. Lava flows or volcanic units can be stratigraphically correlated from borehole to borehole, but not intrusions, hence the importance of distinguishing lava from intrusions, even in zones of hydrothermal alteration where primary textures are masked or obliterated. Moreover, it is difficult, if not impossible, to distinguish between andesite and basalt (or between diorite and gabbro) with the naked eye. Traditional lithogeochemistry does, of course, provide accurate and complete information on the samples being analyzed, but the spacing between these samples, typically several dozen meters, does not allow precise positioning of the geological contacts.

This is one of the strengths of LAMROC data: thanks to its high spatial resolution (less than 1 m) along boreholes, the contacts can be precisely located by simultaneously examining physical property profiles and ratios of immobile geochemical elements by depth. Here is an example for the Bracemac sector: 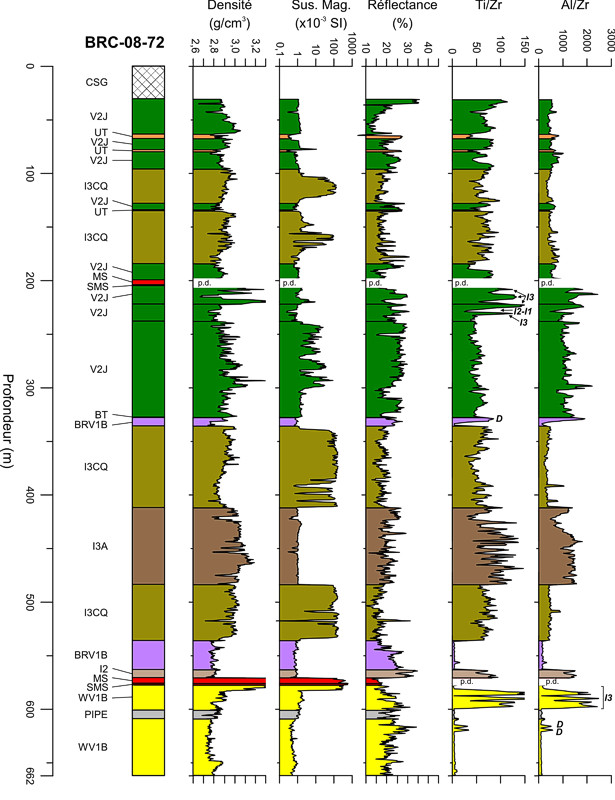 Immediately beneath the main mineralized lens (codes MS and SMS), the original company log identifies the Watson Lake Rhyolite (code “WV1B”) as the main lithology for the 577.60-601.00 m interval, mentioning that chloritization is pervasive (moderate to strong), and that it could be partly a mafic unit. The Ti/Zr and Al/Zr profiles reveal that these suspicions were well founded, since the ~581–598 m interval shows very high ratios, suggesting mafic rock dominance (probably intrusive). A number of intrusions also appear to be present below the upper mineralized lens (around 200 m).

Here are various chemical elements as a function of depth for the same borehole, BRC-08-72: 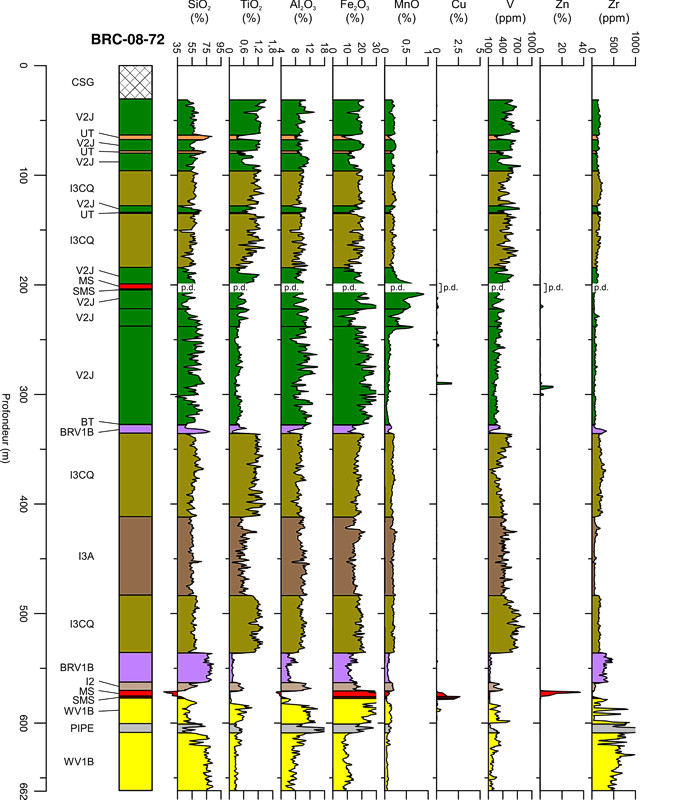 The copper and zinc peaks essentially indicate the position of the main mineralized zones. The Zr levels clearly show the difference between the Bracemac Rhyolite (code BRV1B) and Lake Watson Rhyolite. Titanium is higher in quartz-bearing gabbros (I3CQ) than in ordinary gabbros (I3A). An Mn peak, interpreted as hydrothermal in origin, is observed under one of the VMS lenses, possibly related to chlorite alteration.

Here is the mineralogy (infrared method) by depth: 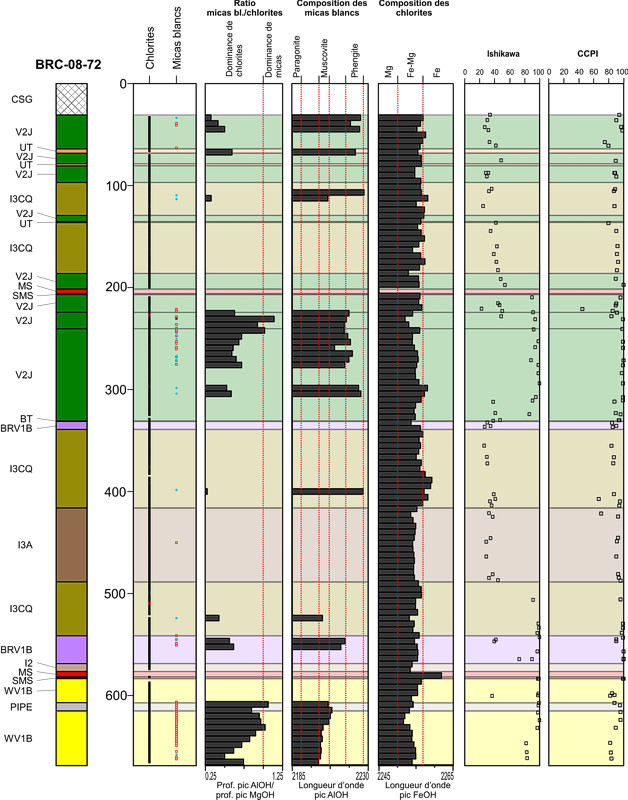 The most abundant minerals are chlorite, white mica (sericite), epidote, and amphiboles. White mica is concentrated under the VMS lenses in areas otherwise rich in chlorite, ranging in intensity up to chloritite, with Ishikawa indices of over 80%. This distribution of white mica appears to be independent of the host lithology, since the upper lens (around 200 m) is located above mafic lava, while the main lens overlies the Watson Lake Rhyolite. In addition, white mica is not present immediately beneath the mineralized lenses, which is typical of bimodal mafic VMS host rocks in the literature.

The composition of white mica in borehole BRC-08-72 varies from muscovite to phengite, depending on the position of the AlOH absorption peaks. Compositions are mostly phengitic, except in the lower lens wall where muscovite is found. In other words, the micas in the main alteration pipe have a shorter wavelength AIOH peak than those in the rest of the borehole. Further white mica studies are planned at Matagami.

We are also exploring the use of multivariate statistics to automatically recognize lithological classes by depth using LAMROC data. Such methods do not replace the need for geologists, but can help them in their work by identifying cryptic lithological contacts or protolites in alteration zones. The initial model, illustrated below and produced by B. Fresia, uses cluster analysis to separate the measurement points according to their physico-chemical signature. 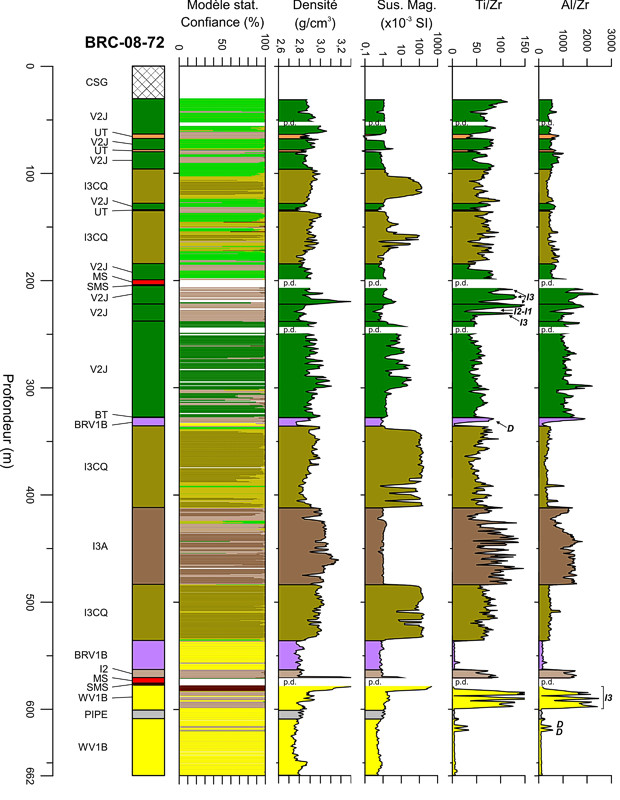 The main lithological contacts, as observed in the original description of BRC-08-72, are clearly illustrated in the findings of the analysis (“static model” column), confirming that the result is valid and useful on the whole. The statistical model suggests eight lithological classes in the non-mineralized rocks, which are interpreted as follows, from top to bottom:

(1) Basalts (light green in the figure)

(6) Rhyolites, including the Watson Lake Rhyolite and Bracemac Rhyolite (yellow)

Several other pseudo-logs for the same drill hole are presented in B. Fresia’s master’s thesis (see references below).

The following images provide a preview of some of the lithologies present in the BRC-08-72 borehole. The benefit of these images—in addition to constituting a complete virtual archive of the drilling—is that they make it possible to compare the visual aspect of the rock with the properties of interest, even if the cores have disappeared or are not available to the person interpreting them. 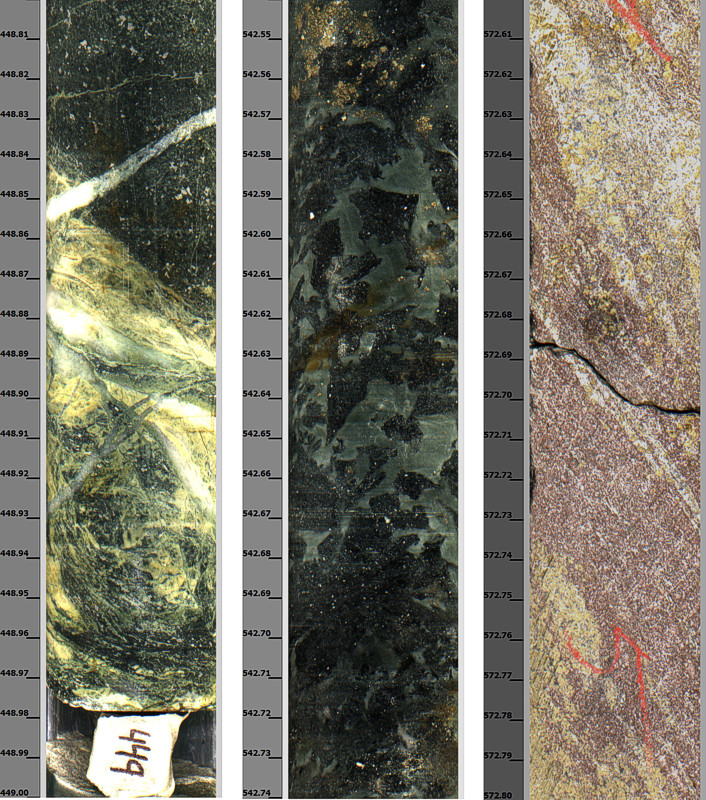 From left to right:

HERE OR ELSEWHERE, WE NEED TO INCLUDE A LIST OF PUBLICATIONS STEMMING FROM RESEARCHERS’ USE OF LAMROC. PLEASE START WITH THE LIST FOUND AT http://lamroc.ete.inrs.ca/publications/ AND ADD THE FOLLOWING:

You can also consult the following MRN reports (e-Sigeom):

Similar work has been conducted in Chibougamau, in collaboration with MRN, Cogitore Resources Inc., and Chibougamau Diamond Drilling:

Mobile Laboratory for the Physical, Chemical, and Mineralogical Characterization of Rocks