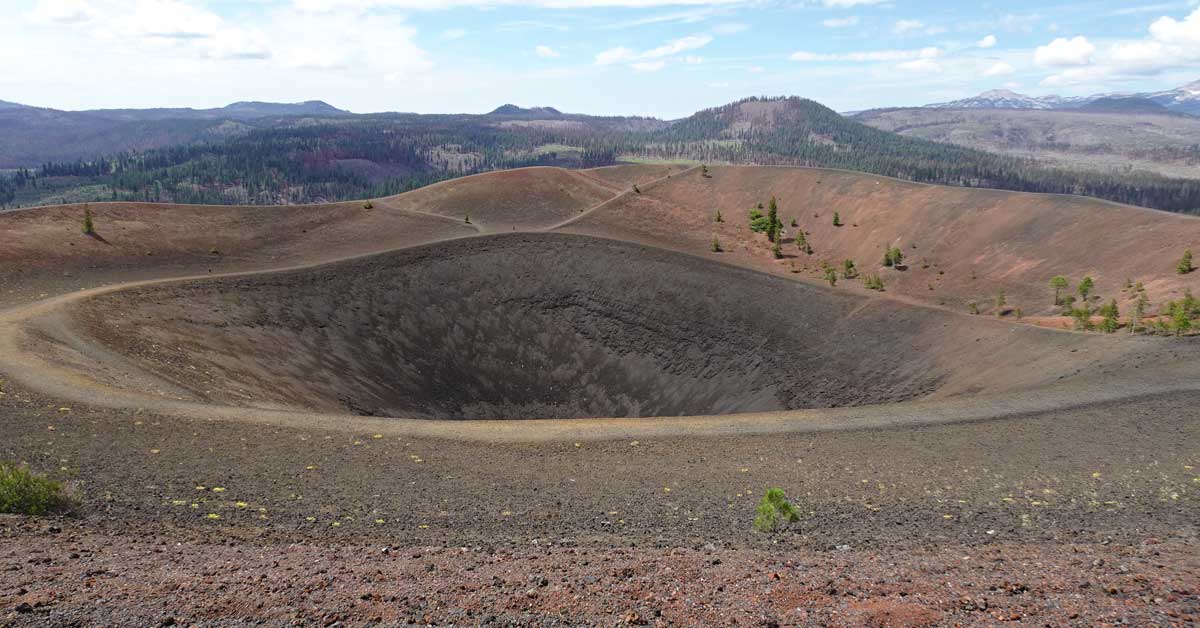 The double crater on top of Cinder Cone, in Lassen Volcanic National Park, California. This is a monogenetic cinder cone volcano, which has erupted only once. The double crater could be due to variations in eruptive intensity. Photo: Grégoire Pasdeloup.

Many will remember the striking images of the thick ash cloud that followed the 2010 eruption of the Icelandic volcano Eyjafjallajökull. The consequences of this eruption reached far beyond Iceland’s borders, as it shut down air traffic across much of Europe for five days. Around the world, an average of twenty or so volcanoes are active at any given time.

Many scientists study volcanic deposits, the result of eruptions. These deposits include volcanic ash, or particles smaller than two millimetres. For eruptions without eyewitnesses, studying and interpreting these deposits remains the main way to understand what a volcano is capable of, and therefore the hazards to people and infrastructure that future eruptions could pose.

What can we learn from the ash that falls from eruption plumes?

Sophie Leiter and Grégoire Pasdeloup, members of Professor Pierre-Simon Ross’s team of earth sciences PhD students, are investigating just that. Together, they spent several months travelling around northern California, Oregon, and Arizona to study the ash from different types of volcanoes. It was a unique and enriching field experience for the two young scientists, who have been bitten by the volcanology bug.

The team’s research focuses on magma fragmentation. This critical process is the key to the explosiveness of some eruptions. Differing fragmentation mechanisms are one reason volcanoes erupt differently. The two students have chosen to study monogenetic volcanoes, which are formed in a single eruption. Parícutin, which appeared in 1943 in a Mexican cornfield, is one of the most famous examples of this type of volcano.

“Our work consists of analyzing volcanic deposits to link a volcano’s eruption style with field observations. In the longer term, we’d like to determine the nature of the explosivity and see how deposits can tell us about the eruption style.”

Grégoire is interested in cinder cones, which are cone-shaped volcanoes formed as fragments pile up near the vent (the part of the volcano from which magma comes out). In these cones made of scoria, the magma fragments itself. As for Sophie, she studies phreatomagmatic eruptions—explosive interactions between magma and groundwater. These eruptions are, by far, the most dangerous events with that type of volcano.

“When magma meets groundwater, it creates highly explosive eruptions that produce a lot of ash. There can even be lateral density currents that can reach tens or hundreds of kilometres per hour and devastate everything in their path,” explains the University of British Columbia master’s graduate.

A scoria cone can reach up to 300 metres high. It is typically surrounded by a wide “mantle” of pyroclastic deposits that settle over several kilometres. At the base of the cone, these deposits can be up to 5 or even 10 metres thick, making it impossible to reach the base by digging with shovels. As a result, scientists in the field need to travel several kilometres away to be able to collect samples of all the volcano’s strata. During the trip, the group dug dozens of pits in the pyroclastic deposits of three volcanoes (Cinder Cone, Blue Lake maar and Sunset Crater) and collected hundreds of samples.

“Sampling different layers of ash lets us closely analyze the particles based on their size, texture, and origin. From there, we can trace the events that led to the formation of these deposits,” explains Sophie.

Currently, there is no single methodology used to analyze volcanic ash. This makes it impossible to directly compare ash deposits from different volcanoes or types of eruptions.

“The lack of consistency in data acquisition methods for volcanic ash means that, at present, it is not possible to combine two studies into a single diagram. Scientists are measuring different parameters in different ways.”

In previous work, Professor Ross’s team at the Eau Terre Environnement Research Centre developed a standardized methodology, which Grégoire and Sophie are using for their current projects. This methodology was published in the journal Bulletin of Volcanology earlier this year[1] to allow scientists from different groups to use it. If the method is adopted, the ash of any volcano could be studied in the same way, since the data acquisition would finally be comparable.

For Sophie Leiter, the love of volcanoes began with a meeting.

“During my undergraduate studies, I met a young, bright professor whose love of science sparked my own. I didn’t know anything about volcanology, but she encouraged me and I got hooked pretty quickly. It’s been several years and I’m as passionate as ever,” she says.

During the formative field experience this summer, the PhD student had the opportunity to meet with leading volcanologists and visit iconic sites such as the Cascades Volcano Observatory. 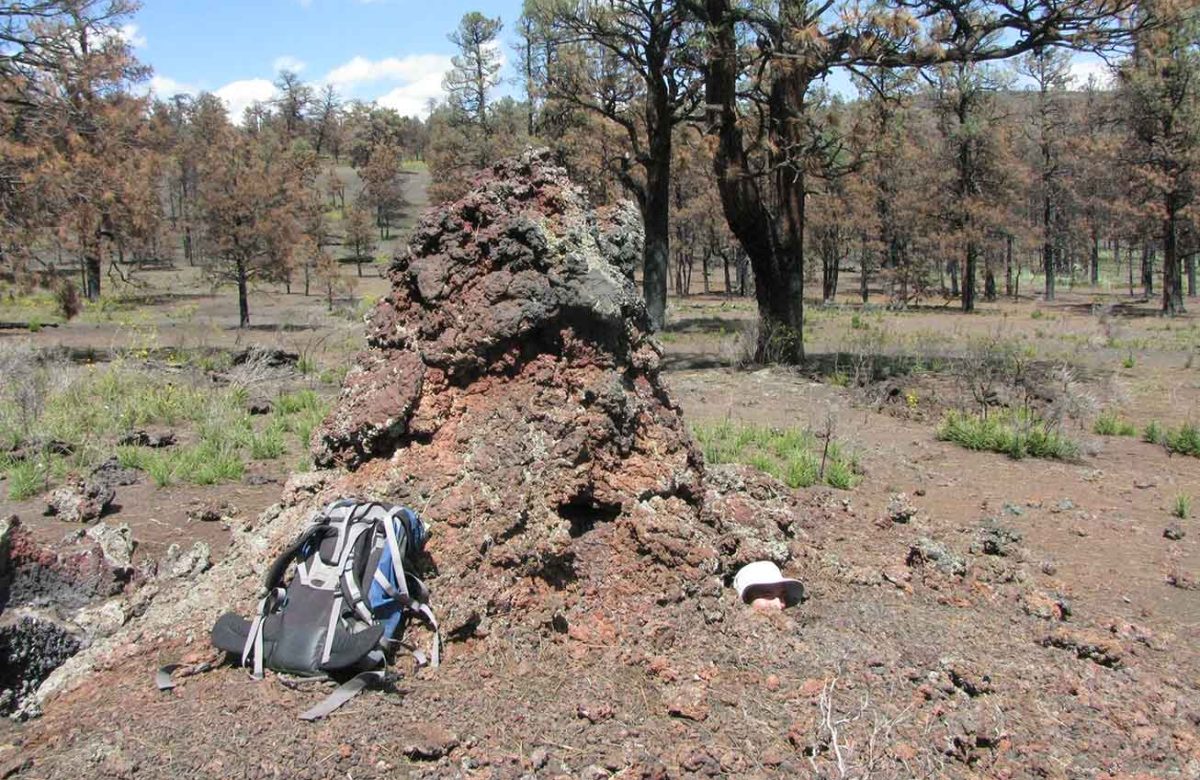 The Kana’a basalt flow emerged from Sunset Crater volcano, an approximately 1000-year-old cinder cone in northern Arizona. The lava flow formed a “hornito,” in which Grégoire Pasdepoup, a doctoral student in earth sciences at INRS, is hiding. Photo: Pierre-Simon Ross. 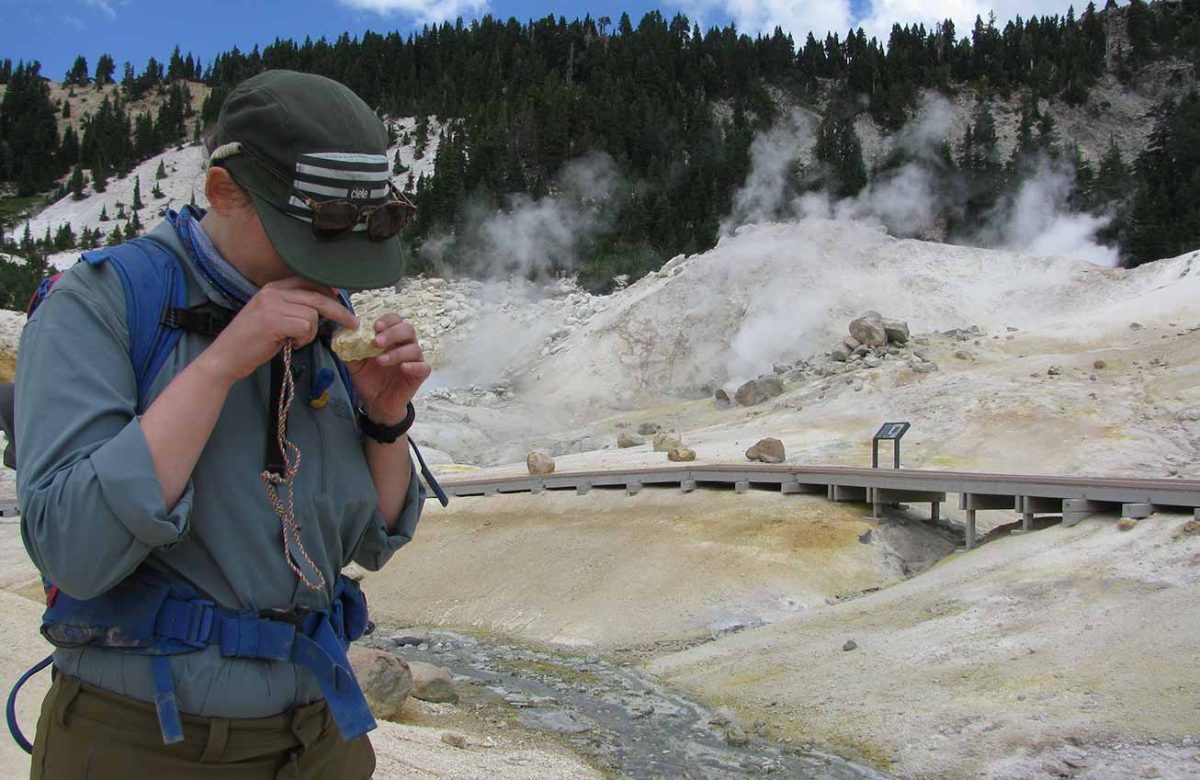 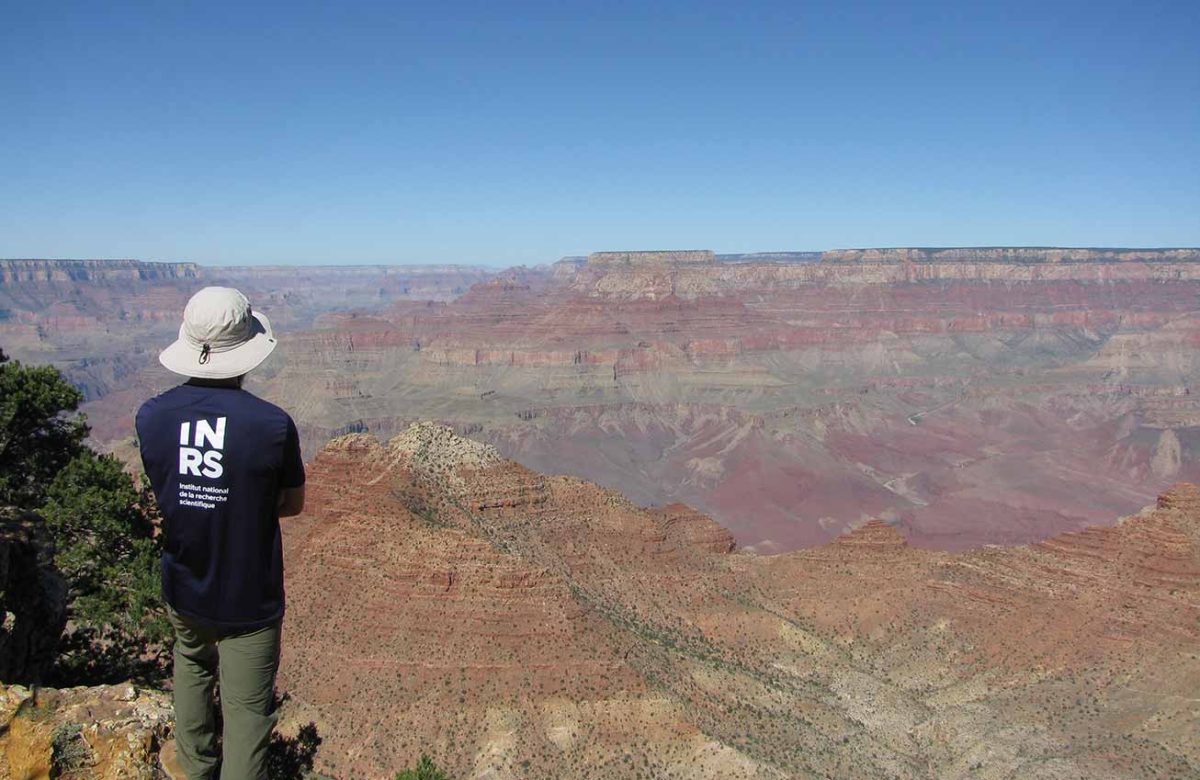 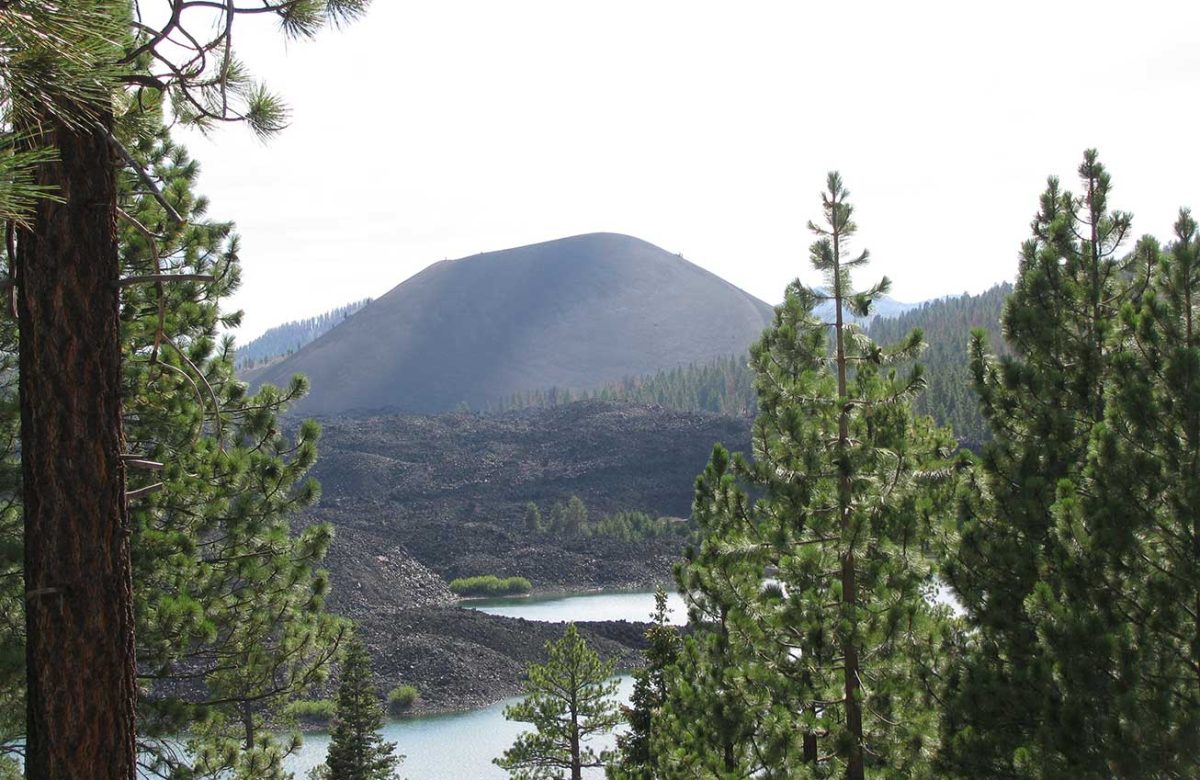 Cinder Cone volcano is located in Lassen Volcanic National Park, California. It is a small scoria cone volcano, a few hundred meters high, but with steep slopes. At the base of the cone, lava flows have come out. View from the opposite side of Butte Lake. Photo: Pierre-Simon Ross. 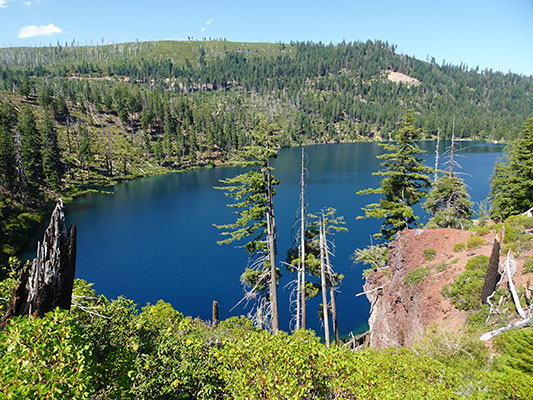 Maars are volcanoes that excavate a crater below the pre-eruptive surface. At the end of the eruption, in humid regions, the crater fills up with water. The Blue Lake maar, in Oregon, is a good example and is the subject of Sophie Leiter’s PhD work in Earth sciences at INRS. Photo: Grégoire Pasdeloup. 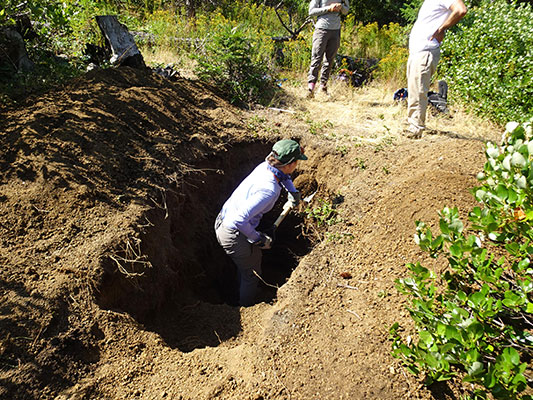 Blue Lake Volcano in Oregon is a Holocene maar. To sample its ash deposits, pits must be dug with a shovel. Earth Sciences PhD student Sophie Leiter is at work. Photo: Grégoire Pasdeloup.

“So much of geology takes place on a time scale of millions of years, but volcanoes are on a more human time scale when it comes to disasters. It makes them easier, but also harder for people to understand.”

For Grégoire Pasdeloup, fieldwork is the biggest draw.

“Fieldwork is what I enjoy most about geology. Being in front of rock outcrops and deposits is so much more instructive. We learn much better with our professor, who’s there with us answering our questions,” says Grégoire.

“This multi-month field experience was an opportunity for me to show them many different types of volcanoes, including very young and well-preserved ones. We weren’t just digging pits!” Professor Ross concludes with a smile.

For the trio of volcanologists, the next step won’t be as up close and personal. They’ll be analyzing the volcanic ash in the lab following the standardized protocol. However, the students will remember this field experience for the rest of their lives. Not only did it give them the chance to visit a multitude of volcanic sites, it also let them build a research network around a promising project for this fiery field!