A research team develops a method to locally amplify the power of an optical signal without increasing the unwanted noise content. 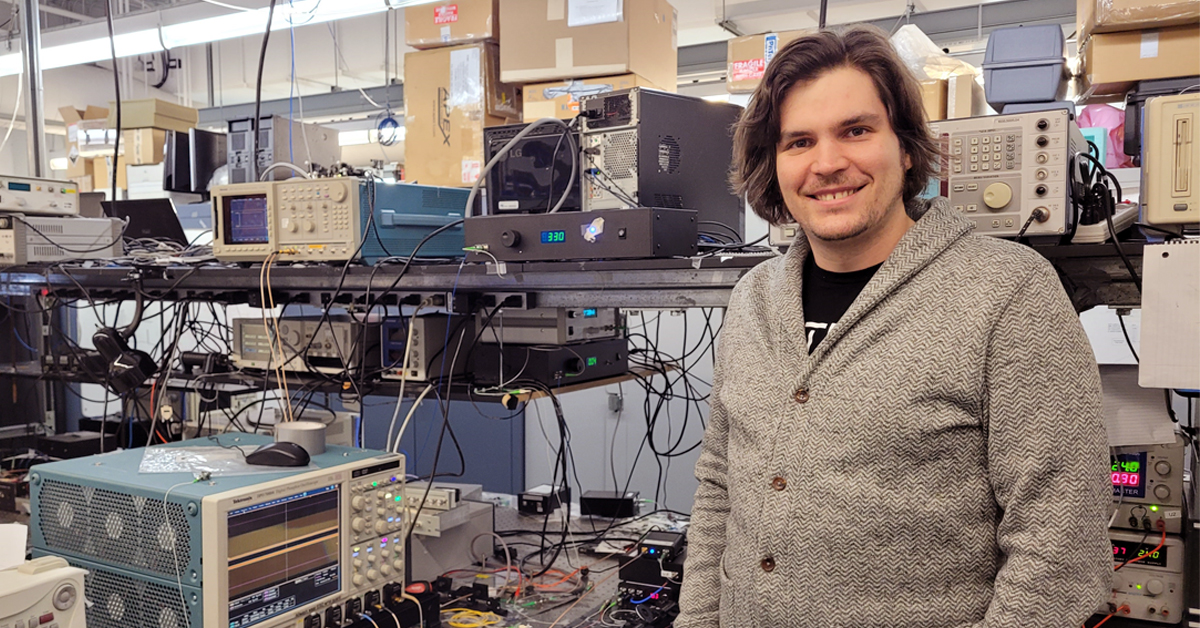 Weak optical signals are common in many science and technology applications. However, they are difficult to detect or process due to the incoherent noise that is inherently present in any system. PhD student Benjamin Crockett and colleagues, working under the supervision of Professor José Azaña of the Institut national de la recherche scientifique (INRS), have conceived a technique for the recovery of weak, noise-dominated optical signals. Their research was published in the prestigious journal Optica.

This achievement is relevant to various fields like telecommunications, bioimaging and remote sensing. For example, there is considerable loss from long-distance propagation through the optical fibre. In light-based biomedical imaging applications, there are limitations for the light power to avoid damaging the living tissue. Similarly, in lidar applications (laser remote sensing), high optical powers can pose a threat to the eyes of a passerby. In all these cases, the recovery of weak, noise-dominated signals remains a key challenge.

Lasers have enabled tremendous advances in so many fields of research. Yet the problem of sensitivity and noise eventually leads to an obstacle for further development.

“ We hope that this technique could be used by researchers around the world to access previously unattainable information contained in weak, noisy signals.”

Benjamin Crockett, PhD student and first author of the study

Most common approaches are ill suited to retrieve a weak signal because they either further attenuate the signal or inject further amount of noise. The new method developed by the researchers uses passive amplification of the signal of interest over the noise, enabling access to signals that could not be recovered otherwise. No other technique simultaneously increases the energy of the signal of interest while reducing its relative noise content.

To achieve this, the researchers exploit the Talbot self-imaging effect, which is observed when a periodic train of pulses propagates through a dispersive medium such as an optical fiber. It causes different frequency components of light (i.e., the different “colors” of light) to travel at different speeds. The Talbot effect was previously utilized to coherently “stack” or combine consecutive pulses in the incoming train, leading to a passive amplification of the pulses’ peak power.

In the work reported in Optica, the INRS researchers were able to extend this technique to achieve passive amplification of any given arbitrary signal, without a requirement for periodicity.

“We realized that we could find a particular arrangement so that the Talbot effect could be used to amplify aperiodic signals, which is to say, virtually any of the signals found in these different practical fields.”

Just like a physical lens can be used to focus a weak and large image into a narrower and more intense beam, the proposed system can be used to redistribute the energy of a weak signal into a series of high intensity pulses. This power focusing effect can be achieved without distorting the signal shape (i.e., carried information) and without increasing the noise along the signal.

The researchers believe this discovery opens many avenues for upcoming research lines. It could be possible to also adapt this technique for 2D or 3D spatial images, a feat that may have important applications in astronomy research, photography or holography, among others. Furthermore, while the present demonstration focused on optical waveforms, such as the ones used in telecommunications, this technique could be adapted for different types of waves, including radio, microwave, plasma, acoustic or even quantum waves.