As a research assistant in Professor Valerie Langlois’ lab at Royal Military College of Canada, in  Kingston Ontario, I helped facilitate the first experiments to test the toxicity of diluted bitumen (or dilbit) to fish and frog embryos.

When discussing what projects were lacking with oil exposure and birds, I could not resist the temptation to conduct the research myself! That is where my PhD journey started at the Eau Terre Environnement Reasearch Centre of the Institut national de la recherche scientifique (INRS), with Valerie Langlois, professor at INRS, and Shane de Solla, researcher at the Environment and Climate Change Canada (ECCC).

Dilbit is a type of oil commonly transported by pipeline, and yet until recently, we knew very little about its toxicity to wildlife. With the increase in transport of oil products across Canada and the world, the risk of a spill increases. My field of research is ecotoxicogenomics, which uses molecular techniques to study the toxicity of various contaminants on ecological organisms. It is often difficult to characterize both exposure and effect in field scenarios. However, by studying ecologically and economically important species, we can attempt to link lab experiments to real exposures in the field.

With support of ECCC, I collected double-crested cormorant eggs from relatively clean sites in Lake Ontario and Northern gannet eggs from Bonaventure Island, Gaspésie. I transported the eggs back to the lab, exposed them to dilbit and artificially incubated them. When wildlife is exposed to contaminants during  sensitive life stages such as embryonic growth, molecular changes can interrupt the timely expression of genes necessary for normal development. Therefore, the goal of my PhD research is to assess the expression of thousands of genes at once to identify these interruptions and the molecular mechanisms of toxicity.

Studying wild seabirds and waterbirds has its perks. For one, I get to go to some pretty cool places to collect samples for fieldwork including some isolated colonies where the general public does not get the chance to visit. These places provide spectacular views with birds nesting as far as you can see on the island and whales splashing in the ocean. However, it is not all serene! The noise, including squawks and chips of a seabird colony, can be deafening at times. Not to mention the smell of some seabird colonies including rotting fish (how the parents feed the young) and guano. However, I would not change the experience, as there is something special about seeing your study species in its natural habitat!

This year, because of COVID-19, I was not able to do fieldwork to collect eggs of wild birds during their short breeding season. Therefore, I will work with chicken eggs, which is a model species in toxicology. Similar to searching for a needle in a haystack, I am excited to generate many data using transcriptomic techniques to search for biomarkers of oil exposure and effects in multiple bird species.

Sarah Wallace is beginning her 3rd year of a PhD in water sciences at the Centre ETE, under the supervision of Professor Valérie Langlois of INRS and Shane de Solla of ECCC. She holds a Master’s degree in Conservation Biology and a Bachelor’s degree in Biology from Queen’s University (Kingston, Ontario) and is the recipient of an NSERC Postgraduate Scholarship and a Foncer PURE Network Scholarship. Since 2020, she has been one of the student advisors for the Canadian Ecotoxicity Workshop. She is interested in science popularization and co-founded and co-edits a blog called Dispatches from the Field.

To know more about her projects: 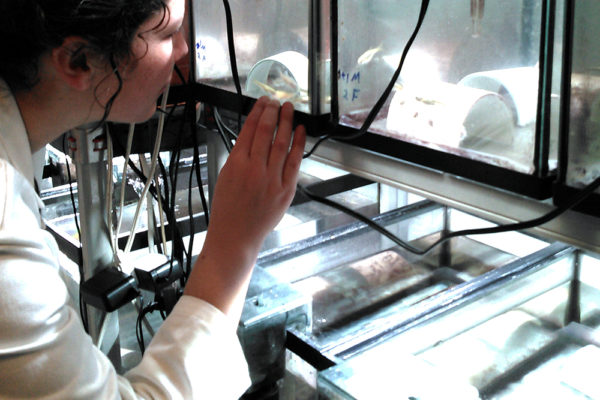 My serial research: The doctorate of Linda Lara-Jacobo in ecotoxicology

Research Grants received in May