Our researchers are making a difference in the fight against cancer

Cancer is the leading cause of death in Québec. In 2019, an estimated 55,600 Quebecers were diagnosed with cancer and 22,100 people died from the disease. On World Cancer Day, February 4, learn more about the work of professors at the Institut national de la recherche scientifique (INRS) to prevent and treat cancer. 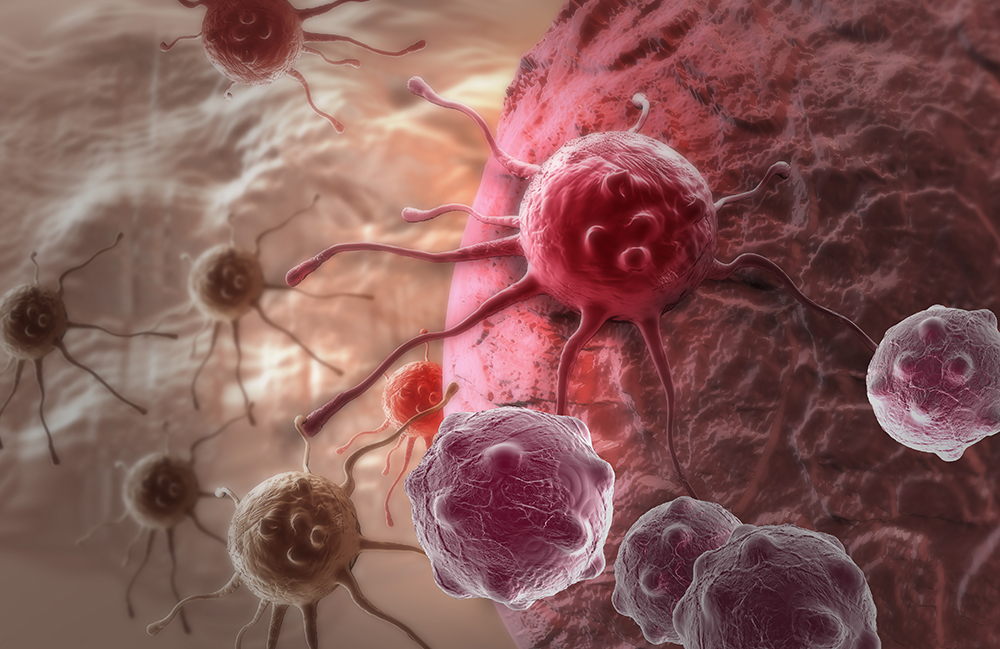 Plante is particularly interested in gap junctions—small channels between cells that allow for the direct communication and rapid exchange of signals. This means of communication seems to play an active role in tumour cell growth, depending on the stage. “A cancer cell will sever ties with other cells; this inhibition of interactions will enable other cells to eliminate it, and allow cancer cells to invade other tissues,” explains Plante. “However, during metastasis, the cancer cell appears to re-establish contact to facilitate tumour growth in the surrounding tissue.” The role of these interactions also appears to vary depending on the type of breast cancer. For some types, these interactions mean the person will have a better prognosis. In other types, the cancer cells reconnect with each other in ways that make them grow faster.

In addition to the loss of interactions, Isabelle Plante studies how environmental pollutants may have an impact on breast cancer. Her research in toxicology focuses on endocrine disruptors, substances that mimic hormones.

“This is really important because the mammary glands are highly regulated by hormones. Even a small imbalance can have an impact.”

Endocrine disruptors can cause breast cancer in two ways. Mammary glands grow the most during puberty and during pregnancy when a number of hormones are activated. Exposure during those critical periods can dysregulate the normal hormonal balance and increase the risk for breast cancer. In addition, exposure to endocrine disruptors in utero or during early life, when the hormones governing mammary gland development are not active yet, can trigger early development, which is known to increase the incidence of breast cancer.

Hormones also play a role in cell proliferation, which is what leads the mammary glands to develop. However, precancerous cells that receive signals from endocrine disruptors can also respond to these signal by increasing their proliferation and cause tumours to form. The effect is amplified in hormone-dependent breast cancer. Professor Plante’s team is starting a new project to study the effect of a family of molecules called brominated flame retardants, chemicals added to various products such as plastics to make them less easily flammable. Several members of this family of molecules are known endocrine disruptors.

Cancer and the Environment

What factors increase the risk of developing cancer? This is the question cancer epidemiologist and Professor Marie-Élise Parent is trying to answer. Parent and her team study the role played by the environment as a whole. “We look at air pollution, light pollution, and the amount of green spaces around where people live. We also look at work environments, because workers are usually exposed to chemicals at higher levels than the general population,” says Parent, specialist in cancer epidemiology at INRS.

Professor Parent has studied brain, lung, and breast cancer, but is currently focusing on prostate cancer. Prostate cancer is a special case: incidence rates vary widely around the world and it is believed that the environment is the main factor. “The incidence rate of prostate cancer in some countries is 25 times higher than in others,” Parent explains. “When men move to a high incidence area, they acquire this high risk of developing cancer, even if they come from a low incidence area. If it was simply a matter of genetics, the incidence wouldn’t change.”

After skin cancer, prostate cancer is the most common cancer among men in Canada. Generally speaking, the five-year survival rate is 93%. However, nearly one-third of prostate cancers are aggressive.

“The challenge is to try to understand what factors cause aggressive cancer,” Parent adds. “We suspect that they’re not the same as more common cancers.”

To isolate specific risk factors, Parent’s team conducted a major study on prostate cancer in Montréal between 2005 and 2012. “It’s the largest study in the world that looks specifically at environmental factors,” says Parent. “We recruited 2,000 newly diagnosed men and 2,000 healthy men. We conducted several hours of interviews to go over their history.”

The sizeable database requires advanced statistical analysis. “Our students are working to analyze the data and everyone has a piece of the puzzle,” says Parent. “For example, individuals living in areas with high levels of vehicle pollution have an increased risk of prostate cancer. Conversely, men who live surrounded by green spaces are less at risk. Exposure to certain chemical agents, such as benzene, has also been found to be associated with increased risk. Our goal is prevention, so we’re hoping to come up with specific recommendations.”

Viruses and tumours have a lot in common. Both have fast replication rates and a tendency to mutate repeatedly to evade the immune system. What if we could use viruses to trigger the immune system to respond to a growing tumour? That was the line of questioning of INRS Professor Alain Lamarre considered while studying antiviral response. “If a virus is injected into a tumour, will it sound the alarm and alert the immune system? Will this then trigger an anti-tumour response?” wonders the immunotherapy expert.

In his laboratory, the researcher is studying two approaches that take advantage of the immune response. The first uses oncolytic viruses capable of attacking the tumour. “You inject a virus that infects tumour cells and modifies them to alert the immune system. It could even create an immune memory that would prevent the tumour from coming back,” he explains.

The problem with the oncolytic approach is that the virus could infect normal cells.

“By creating mutant viruses, we could improve their specificity to tumour cells. The virus has to be aggressive enough to attack tumour cells, but not too aggressive to attack healthy cells.”

The second immunotherapy approach is more innovative: introducing a plant virus. This type of virus does not infect humans or animals, but is very foreign to the immune system. According to the professor, “the plant virus induces production of an antiviral molecule that stimulates the immune response and helps the system recognize the tumour. It triggers a strong anti-tumour response.”

Professor Lamarre’s team is trying to combine these approaches with other anti-tumour therapies, such as immune checkpoint inhibitors (anti-PD-1). “The tumour creates an immunosuppressive environment, which acts like a brake in the immune response. Using Anti-PD-1 is like lifting your foot off the brake, and the viral approach is like stepping on the gas. We’re hitting it from both sides at the same time.”

However, Professor Lamarre cautions that immunotherapy approaches do not work for all types of cancer. “It’s mostly for cancers with a high mutation rate, such as melanoma,” he says. “Since cancer comes from our own cells and our immune system is trained not to attack them, there may be a response if the build-up of mutations makes the cell appear abnormal to the immune system. If the cancer progresses more slowly with fewer mutations, as with prostate or breast cancers, the approach is less effective.”

Inhibiting a Protein to Counteract Metastasis

For the past 15 years or so, a class of proteins has been attracting attention among cancer researchers: galectins. This interest stems from the protein’s ability to promote tumour growth. Professor Yves St-Pierre of INRS focuses on galectin-7, which is responsible for metastasis formation. “We are the first to demonstrate the role this protein plays in how aggressive certain cancer cells are,” said the cellular biology expert.

His team is particularly interested in triple-negative breast cancer. “It’s a very difficult subtype to treat, and the level of galectin-7 found in these cases is abnormally high,” said Professor St-Pierre, who has been studying cancer for 25 years. Cancer cells produce this protein and release some of it outside their membrane. Once released, part of the galectin-7 will bind to immune system cells to neutralize them and create an immunosuppressive environment. The rest will attach to surrounding cancer cells. This allows the protein to promote the division of cancer cells so they are better able to spread throughout the body and form metastases.

How can we counter the negative effects of this protein? “You can’t really stop the cell from expressing galectin-7. So the challenge is finding a drug to neutralize it once it is released,” explained Professor Yves St-Pierre. To solve this problem, he has been working with INRS professors Nicolas Doucet, an expert in the structural biology of proteins, and David Chatenet, a pharmacotherapy specialist.

The three laboratories with complementary expertise wanted to find a way to inhibit galectin-7.

he problem is that the entire galectin family has a similar molecular structure. So the researchers needed to target something specific only to galectin-7 without inhibiting other types of galectin. “Certain types of galectins are beneficial to cells, so a massive carpet bombing approach is out of the question because it would have major side effects,” said Professor Doucet.

What separates galectin-7 from the rest of the galectin family? “These proteins cannot function on their own at the molecular level,” said Professor Doucet. “They must be coupled with another identical galectin molecule to form pairs. The pairing configuration varies by subtype. For instance, certain galectins have a side-by-side molecular organization. But galectin-7 proteins can only pair up back-to-back.” To disrupt this unique galectin-7 configuration, Professor David Chatenet has developed a peptide (small chain of amino acids) specific to the targeted protein. The peptide will only stick to the back of galectin-7 proteins to prevent them from recognizing each other and forming pairs. Blocking galectin-7 from pairing effectively inhibits the protein so it can no longer function effectively.

The inhibitors developed in the lab of Professor Yves St-Pierre in Laval target triple-negative breast cancer, but they could potentially be used with other types of cancers that present overexpression of galectin-7, such as lymphoma and ovarian cancer, which are responsible for the deaths of over 4,000 Canadians each year. 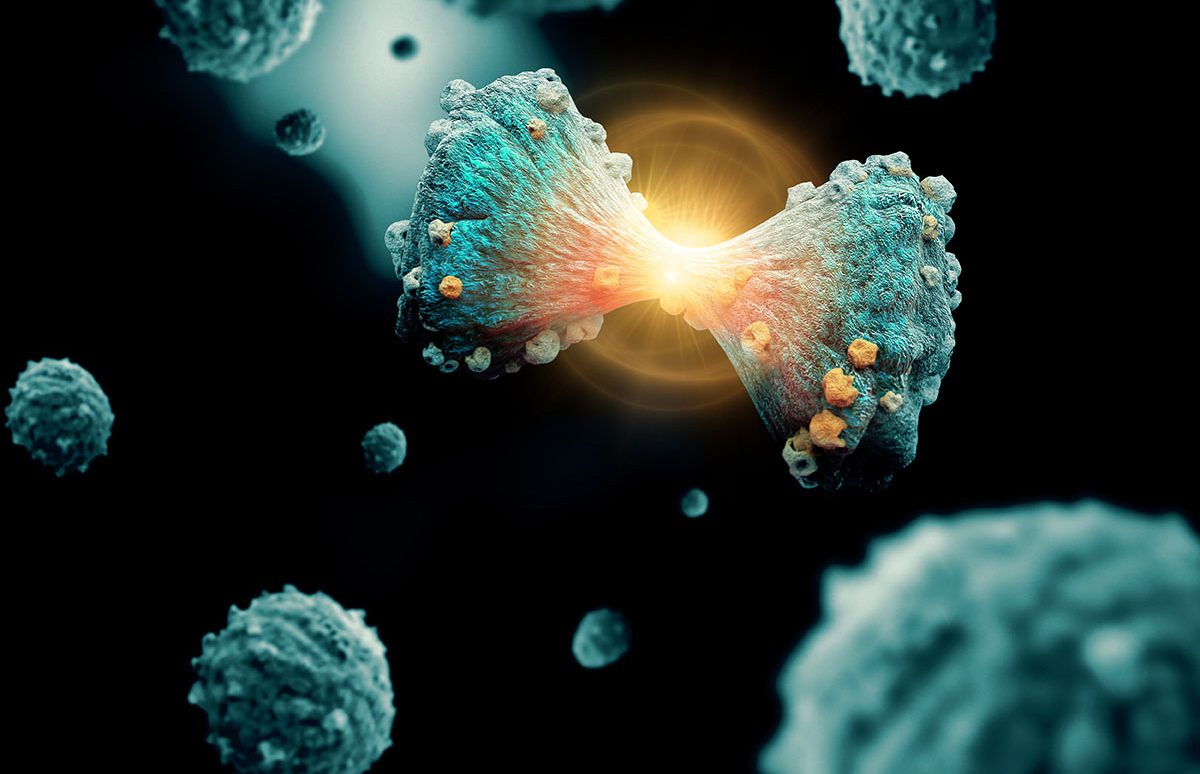